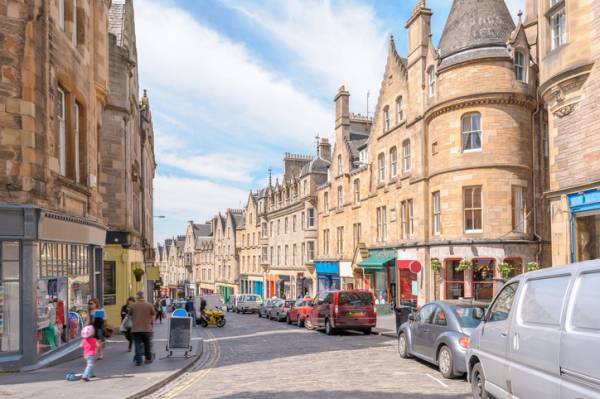 The Scottish capital has so much to offer from its past, present and future

Edinburgh is one of the most famous cities in the world. Its unique blend of history and innovation gives it an unparalleled sense of character that draws in residents and tourists from across the globe. It’s no wonder therefore that in the last ten years, Edinburgh’s population has risen by 12.5% – more than double the population growth witnessed across Scotland as a whole (4.9%). What’s more, the city attracts over 13 million visitors every year.

It’s not hard to see why. From its enviable retail district to its iconic castle, there are endless reasons to pay the Scottish capital a visit, or to even make it your home. Forget New York, Edinburgh is the true city that never sleeps, and it never stands still either. We’re going to explore some of the ways this historical and forward-thinking city has transformed over the years, from humble beginnings to a bright and prosperous future.

A rich past: the first Edinburgh homes discovered

Edinburgh’s history has always been part of what makes it stand out from other UK cities. There are few other locations which wear their heritage so proudly, as tales and signs of Edinburgh’s past can be found all over the city from the Old Town’s cobbled streets to its underground vaults. Sites like Greyfriar’s Kirkyard, Holyrood Palace, Edinburgh Castle and the Royal Mile all have their own fascinating stories to tell, adding to the city’s irresistible personality.

In fact, stories from Edinburgh’s rich history are still being uncovered today. In November 2018, archaeologists found what they believe to be the remains of Edinburgh’s very beginnings. The remnants of an early 12th century home were discovered in Cowgate, remains that are thought to predate the city of Edinburgh itself. This is known because of the kind of pottery found at the scene, which predates the formation of the burgh in the mid-12th century by David I.

Understanding how Scottish towns grow is the Holy Grail for medieval archaeologists, according to Archaeologist for the City of Edinburgh Council, John Lawson. He explains that in places such as Dunbar and Perth, there might have been earlier settlements, and they also know that not everyone in early Edinburgh could have lived in the castle itself. This find is one of the most important and exciting pieces of evidence suggesting a bigger settlement in Edinburgh than just the castle and St Cuthbert’s Church.

If it wasn’t for plans to create a hotel development in the city, this remarkable site would never have been discovered, showing how the past and future of Edinburgh work together to create the city we know and love today.

Despite having a world-famous history that continues to draw people in, Edinburgh doesn’t stand still. Its present is just as inspiring and incredible as its past, with annual events like the Edinburgh Fringe Festival adding a further 1 million people to Edinburgh’s population every August. Edinburgh continues to be strong economically as well, boasting a higher percentage of the working age population in employment than the average of other major UK cities, with 75.6%. What’s more, many of those classed as “unemployed” are members of the student population (42%).

Current plans are set to make Edinburgh even more desirable as well. The George Street and New Town project (GNT) could see cars banned from the city’s George Street area in order to create a “world class space” for pedestrians to enjoy. The plans were put into place after continuous consultations with the community and local groups, and also include surrounding streets like Hanover Street, Frederick Street and Castle Street.

The plans include new plazas and cycle routes which, according to transport and environment convener Lesley Macinnes, will help the scheme create a “world class space that respects and enhances the World Heritage Site”.

Macinnes went on to say that the GNT project is a “crucial catalyst to re-invigorating George Street and a-joining New Town to the present day,” making the area “safer and more vibrant.”

Green councillors welcome the plans and their emphasis on active travel. Representative of the city centre, Claire Miller, said “I welcome the emphasis on increased access to better quality public space, cleaner air and more pleasant walking and cycling.”

Meanwhile, transport and environment vice convener Karen Doran said that the project will be collaborative, and feedback is welcomed:

“Anyone and everyone is now welcome to attend the drop-in sessions and meet the team. We really want to involve as many people as possible in the processes that will help shape this important historic area within our city.”

The plans include a variety of benefits for the area, including priority blue badge parking, an increase in the number of trees planted along George Street, dedicated delivery and servicing areas for businesses, more outdoor seating, dedicated cycle routes and widened pavements.

This is just one example of how Edinburgh continues to transform and better itself, earning its reputation as one of the most desirable cities in the UK.

On a wider scale, Edinburgh’s prosperous position has set it up for a bright future, especially in terms of business and economics. Gross Value Added (GVA) is the value generated by an area, industry or sector of the economy. Currently, half of Scotland’s output (GVA) for finance and insurance comes from Edinburgh. What’s more, in 2016 the GVA per capita in Edinburgh was £39,300 – higher than other major UK cities.

In total, 19,705 businesses were registered in 2017. There were 41.5 businesses per 1,000 residents, representing a higher business density than most other major UK cities. In 2018, there were 2,680 registered charities in Edinburgh and 32% of residents provided unpaid help to organisations or groups – the highest rate in Scotland.

Figures like these are evidence of Edinburgh’s status as a thriving hub of business, culture and charity within the UK, setting it up for an exciting future. There is so much to enjoy about the Scottish capital, so why not explore it further in 2019?

Time goes by but one thing never changes: Edinburgh is one of the most exciting, inviting and prosperous cities in the UK. With so much to offer, 2019 is the perfect time to find your dream home in the Scottish capital. Discover Craighouse from Qmile Developments — the stunning collection of high-quality properties located in tranquil Morningside. See for yourself here.