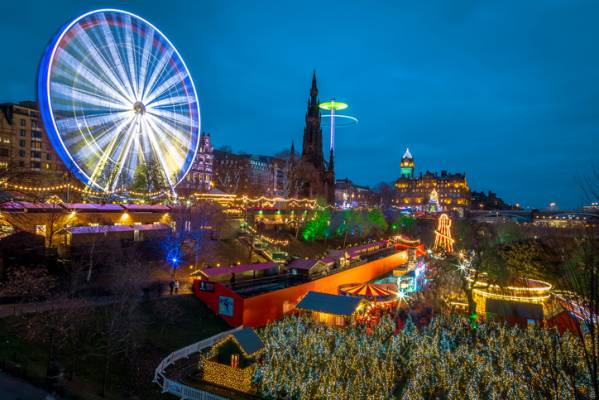 It’s no secret that Edinburgh has a lot to offer. The Scottish capital has long since held the title of one of the UK’s most popular cities for residents and tourists alike, acting as the perfect spot for everything from a day in the park to a night on the town.

And it seems that Edinburgh shows no signs of slowing down. According to the latest research, the Scottish capital continues to be one of the highest ranking cities in both Scotland and the UK as a whole.

So we’re going to be taking a closer look at these figures, as well as exploring the various areas in which Edinburgh truly excels. Ultimately, we’re asking what it is that makes Edinburgh such a great place to live.

Edinburgh is the number one place to the live in Scotland, according to new figures

A new index has revealed that Edinburgh is among the top 10 places to live and work in the UK. The Good Growth for Cities Index, run by PwC, measures the overall performance of 42 of Britain’s largest cities and towns.

The index found a continuing gap between the country’s highest ranking cities – Oxford and Reading – and it’s lowest ranking – Swansea and Sunderland.  However, it did find that even the lower ranking cities demonstrated significant improvement in employment and environmental factors.

Elsewhere in the index, Aberdeen jumped 11 places from last year’s rankings to number 9, while Glasgow was listed as the 25th best place to live and work in the UK.

Here’s what the top 10 places to live in the UK look like:

The cities listed in the index were measure against 10 indictors, revolving around public perception, economic success and wellbeing. It draws upon 10 years’ worth of data, and looks at factors like health, job-creation and work–life balance.

“Edinburgh remains one of the best cities in the UK to live and do business. The announcement of the £1.3bn City Deal for the region will help the city futureproof itself in a world being rapidly altered by technology.”

Gardiner also described the capital as performing “above average in fields like job, income and skills.”

New businesses, job creation, work-life balance and skills development have been key drivers behind Scotland’s long-term plans for growth. As such, the index found that the three major Scottish cities – Edinburgh, Aberdeen and Glasgow – outperformed the rest of the UK in terms of jobs, skills, income and environment.

“Scotland’s cities are in a stronger position today than prior to the financial downturn, and that is thanks to the country having continued to invest in jobs and skills.”

With a decade of data to explore, the index can successfully chart how Scotland’s major cities have changed in the last 10 years, i.e. since the economic downturn.

Since 2005-2007, Edinburgh has increased its index score by 0.31, which exceeds the UK’s average increase of 0.29. This, the report states, is largely due to an improvement in skills among 25-64 year olds. Edinburgh has also seen a growing improvement in the number of new businesses within the city, compared to 10 years ago.

Why do people love Edinburgh so much?

These figures show that the Scottish capital continues to go from strength to strength, drawing in more and more residents and tourists year after year. But what is it about Edinburgh that makes it so appealing?

Let’s take a closer look at some of the factors that make Edinburgh the iconic, inspiring and irresistible city it continues to be today.

With frequent rail and transport connections both on a local scale and around the country, Edinburgh is an extremely connected city.  Edinburgh Haymarket and Edinburgh Waverley offer convenient rail links to locations across the UK, with Waverley opening up right into the centre of Princes Street: the city’s main shopping area. What’s more, Edinburgh airport connects the city to the rest of the world.

For the past decade, Edinburgh has continued to show strength in its job creations and business ventures. The number of successful new businesses in Edinburgh continues to rise, and the University of Edinburgh currently ranks top 10 in the UK and top 100 in the world for the employability of its graduates. Edinburgh also has a higher percentage (75.6%) of the working age population in employment than most major UK cities.

Edinburgh is the number one festival city in the world, offering a unique cultural phenomenon. Every year, the Scottish capital’s festivals attract a combined audience of more than 4 million people. There are 12 main festivals in the city, celebrating everything from comedy and film to art and literature. Chief among them, of course, is the iconic Fringe Festival, which takes place during the summer. The number of tickets sold for the capital’s festivals are exceeded only by the World Cup and the Olympics.

Nowhere does celebration quite like Edinburgh, even outside of its festivals. From the Belthane Fire Festival celebrating the summer solstice, to the Hogmanay fireworks creating explosive displays over Edinburgh Castle, there are endless celebrations to take part in and enjoy in the capital.

As well as being one of the liveliest and exciting cities in the UK, Edinburgh is also one of the greenest. In fact, out of all UK cities Edinburgh has the highest percentage of land recognised as green space, with 49.2%. The second-highest scoring city is Glasgow, with 32%. Edinburgh also has more Green Flag awarded parks than any other city in the UK by a wide margin. 32 parks in the city have been given the Green Flag honour, while Birmingham is in 2nd place with 18. This means that Edinburgh makes up 46% of all Green Flag awarded parks in Scotland.

Edinburgh also recorded the second largest reduction in carbon dioxide emissions per capita out of all UK major cities between 2010 and 2016. You can read more about Edinburgh’s green efforts here.

Edinburgh might be a forward-thinking city, but it is its incredible sense of history which makes it truly special. From the stunning Georgian architecture of the Old Town to the many facts and stories to be unearthed about the city’s fascinating, and often bloody, past, the journey the city of Edinburgh has taken to get to where it is today is part of what makes it one of the greatest places in the world to live.

Another reason to love Edinburgh? It’s home to some of the world’s most beautiful properties, and chief among them is Craighouse. Craighouse is the latest collection of stunning properties from Qmile Developments, located in tranquil Morningside. Click here to discover these incredible apartments, duplexes and townhouses for yourself.