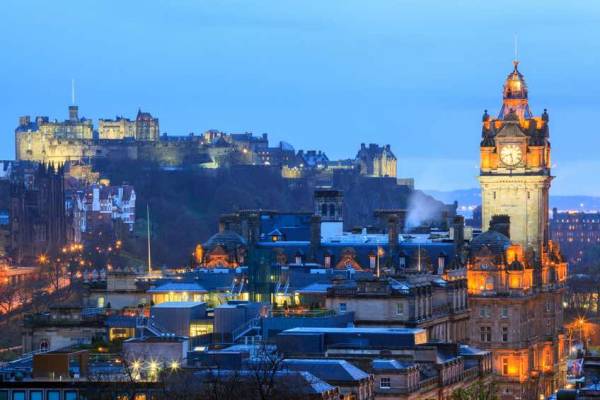 Edinburgh City is renowned for its breathtaking architecture and distinctive style. As a Unesco World Heritage site it welcomes millions of visitors each year to popular attractions such as Edinburgh Castle and the Royal Mile.

It is also a city that celebrates the new, with cutting edge architectural designs giving the capital an energy and vibrancy loved by its tourists and locals.

A short stay or day out in Edinburgh can seem impossible to plan with so many sight-seeing opportunities available all over the city. Here is a quick guide to some of the key sites of Edinburgh Old Town and New Town.

The Old Town of Edinburgh is quite rightly one of Scotland’s most popular tourist spots. Steeped in history and littered with great places to see, eat and drink at every turn, it’s impossible to get bored of this beautiful district.

The site was built with a ‘fishbone’ street structure, centred around the Royal Mile and Edinburgh Castle. It is well known for its medieval architecture and the beautiful Reformation-era tenement buildings that line the streets. Not to mention the wealth of alleyways, cobbled roads and courtyards hidden along its stretch.

The Royal Mile is arguably the most well known street in all of Edinburgh. Stretching up to Edinburgh Castle and all the way down to the Palace of Holyrood. Its name is derived from its historic purpose – originally used for trade up to Edinburgh Castle. Now the street is home to a number of charming bookshops and restaurants.

With no end of eateries and little shops to tempt you, a trip to Royal Mile is a real treat. There are also many excursions available too: a visit to St Giles' Cathedral to see the vaulted ceilings and grand tombs is always highly recommended. And for a taste of Scotland’s rich history, why not take a trip to the newly refurbished National Museum of Scotland situated on Chambers Street?

Quartermile itself is located on the site of the Old Royal Infirmary, with a range of luxury new apartments overlooking The Meadows. This area comes alive with culture during the summer months when performers and tourists take to the streets as part of Edinburgh Fringe Festival.

Edinburgh New Town may have a shorter history, but it’s every bit as rich as that of its older counterpart. Inspired by the Scottish Enlightenment and constructed between 1767 and 1890, it is made up of seven new towns situated to the North of Old Town. The architecture and design of New Town contrasts with the Old Town, due to the more organized grid-iron pattern to the streets. The neoclassical and Georgian architecture is what sets New Town apart from the rest of the City. A day in New Town warrants a visit to Georgian House in Charlotte Square, a perfectly preserved eighteenth century house. Built in 1796 for John Lamont the 18th Chief of the Clan Lamont this lavish home is truly worth the affordable admission price – £7 per adult.

The newly refurbished Scottish National Portrait Gallery, is also a must-see for those with an eye for art. Boasting an amazing array of paintings and photographs, it captures some of Scotland’s most famous faces – and even a few less well known ones.

For those who like nothing more than a day of retail therapy, New Town is undoubtedly the place to go. Visit some of the beautiful designer shops on George Street (and maybe even take a break for a cocktail, too) before sampling the antique shops and galleries on neighbouring Dundas Street.

Both Old Town and New Town have their own distinctive styles and characteristics. But together they help to make Edinburgh the most vibrant city in Scotland.

Thinking of making the move to the Scottish capital? Find out more about the Quartermile’s luxury Edinburgh apartments here.