A guide to Edinburgh’s Camera Obscura 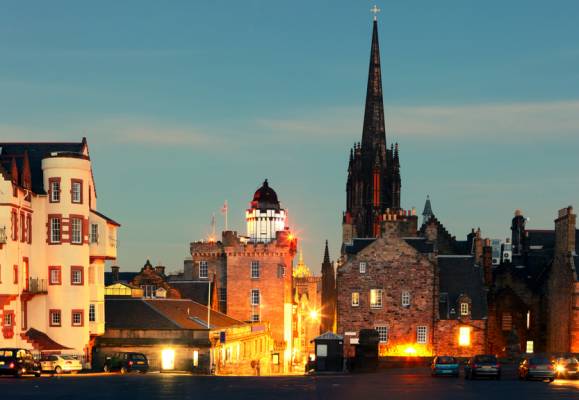 The clocks have changed, the nights may be drawing in and the weather may be getting gradually more inclement, but don’t think for one second that that means the fun needs to stop in Edinburgh.

If you are looking for some indoor fun this autumn, why not investigate the delights of Camera Obscura.

Edinburgh’s Camera Obscura has been a valued attraction for over 150 years, entertaining both visitors to Edinburgh and locals alike. The Camera Obscura sees moving images of the city projected onto a large viewing table, where visitors can have fun with the projections and spy on the city from above.

The Camera Obscura in Edinburgh began its life in the 1800s, as a “Popular Observatory and Museum of Science and Art”.  However, the camera obscura tradition goes back much earlier, to the days of Aristotle in Ancient Greece. He noticed how, when it passes through a hole in a darkened room, light can produce an image on a blank wall. This is where “camera obscura” first found its name – the phrase translates from Latin to “darkened room”.

Many scholars believe that the camera obscura is even older than Aristotle, and believe that early humans may have used the principle to produce the first cave paintings. There is further evidence that the camera obscura was later used for scientific purposes, such as demonstrating that light travels in straight lines as well as being used to view the sun and to aid artists. By Victorian times, giant camera obscuras like the one in Edinburgh were common at the seaside, and visitors used them to spy on unsuspecting couples as a little bit of holiday fun.

Edinburgh’s Camera Obscura has remained largely unchanged since it opened in the 19th Century. Additional lenses have been added and parts moved and restored over the years, but the general principle remains the same. Now, however, visitors are accompanied by a jovial guide who tells tales of Edinburgh’s history while visitors take in the views. Some additional attractions have also been added to the site of the Camera Obscura, which have served to make the attraction an even more exciting day out.

The site boasts a brilliant rooftop outlook, which makes for an excellent vantage point for the entire city. There are a number of free telescopes dotted around the roof, allowing visitors to take in breath-taking panoramic views of Edinburgh. The rooftop is also one of the only points in the city where you can view the entire Royal Mile, as the telescopes are positioned perfectly to look “down the mile”. There are also views of Arthur’s Seat, Holyrood Palace and Scotland’s National Monument, amongst others. If you’re a keen photographer, then the rooftop terrace is certainly worth a visit.

Also at the Camera Obscura is the Magic Gallery, which houses some head-spinningly brilliant optical illusions. The Magic Gallery is the most popular attraction at the Camera Obscura, and it’s not hard to see why. Big kids and little ones alike will love the hall of mirrors, giant lenses and exciting light shows. This floor is fully interactive, so everyone can get involved with the fun. Also in the Magic Gallery is “Light Fantastic”, which purports to be one of the biggest hologram exhibitions on the continent. Explore how holograms are made and, fittingly, even view some “horror-grams” of your favourite spooky characters.

The Camera Obscura can be found right at the top of the Royal Mile, a stone’s throw away from the entrance to Edinburgh Castle. The exhibition is open all year round, closing just one day a year for Christmas.

Wish you lived close enough to the centre of Edinburgh to be able to enjoy all that the city has to offer? Then why not book an appointment at Quartermile today? Call 0845 000 2525.